In Digimon Next, Zanbamon was a member of the Commandments. He originally served as one of the Commanders of the army. Despite serving Barbamon, Zanbamon had a sense of honor. After he was defeated, he redeemed himself and help the main protagonists defeat NEO.

Zanbamon served as a member and general of the Bagra Army.

Zanbamon was a cruel, fighting Digimon who attacked and destroyed many Digimon villages. It was responsible for the destruction of Strabimon’s home village, and also many other Digimon who now lived with Strabimon and Mojyamon. When Yamato and Gabumon arrived in the wooded area where it was moving in the dark, they fought against it, but none of the attacks worked because it was like a ghost. But when Yamato, Taichi, Agumon, and Gabumon found a weapon with Strabimon, they used it to fight it. It was still a tough opponent for them, but when WereGarurumon evolved into CresGarurumon, he managed to destroy it, and after that it was no longer a threat to anyone.

Zanbamon attacks with a katana sword. 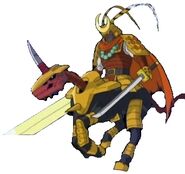