Victor "Vic" Hoskins is the leader of the InGen Security Division, and Owen Grady's arch-nemesis in the movie Jurassic World.

He was portrayed by Vincent D'Onofrio, who also portrayed Edgar The Bug in Men in Black and David Hagan in Fire With Fire.

After being hired by Simon Masrani to regrow InGen Security Inc., he has decided to turn it into a military force and a research company.

Ever since, he concluded dinosaurs to listen to orders, and from then on, he attempted to create an army of dinosaurs, and trained them so he will be able to get them useful for the military. One of the dinosaurs he created in order to do so was the Indominus rex, who quickly turned into a pure killing machine. However, Hoskins wasn't able to train the Indominus rex and went on to train other dinosaurs.

After his past events, he told his right hand Owen Grady about humans being able to own dinosaurs. However, Owen didn't agree with him. Owen then saw a soldier falling into the raptor exhibit, and went to save him without Hoskins' permission.

Hoskins then went to Simon Masrani (the CEO of Masrani Global Corporation) and tried to sell his company a dinosaur army, including the Indominus rex. Masrani however didn't agree and went to kill the I. rex, but Masrani later died when he crashed into the pterosaur exhibit: the Aviary. Because of this, Hoskins took over the company, and the park Jurassic World.

Later, he gets punched in the face by Owen, and Claire calls him a b*tch. Hoskins then says he will let ships take the people off the island, and it is going to happen, with or without them, proving that he didn't care about the tourists, and he only cared about the park itself.

He later orders his lab assistant Dr. Wu to create more dinosaurs for the military, and also had Dr. Wu evacuate the park with some embryos.

He then breaks into the lab with two soldiers and reveals he only manipulated the dinosaurs so he will be able to get a strong military weapon to sell, and end the startup's crisis.

Then, Zach looked at a model of another hybrid dinosaur besides the Indominus rex called Stegoceratops, and said it is not a real dinosaur. Hoskins enters the lab and talks about his plans, but Delta, a Velociraptor whom Hoskins mistakes to be a male, also enters the lab. Hoskins tries to train her to be in the military, using his hand signals and saying in a terrified way, "I'm on your side." Unfortunately for Hoskins, Delta ignores his hand signals and instead bites his hand, and Owen, Claire, Zach, and Gray run away as Delta kills Hoskins, since Delta decided she doesn't want to be part of the military.

Vic Hoskins may not have cared about the tourists. But, he did have some good in him, since he cared about his nation: the United States of America. This was proven when he tried to train dinosaurs and sell them to the U.S.A. military, since dangerous dinosaurs are more deadly against enemies than a bunch of foot soldiers and using dinosaurs instead of humans would reduce deaths for the U.S. Hoskins also was shown to care for a wolf pup which he rescued and was upset when Marsani died. Hoskins didn't even punch Owen back after Owen hit him in the face and was horrified when his men got torn apart. Hoskins also sent Wu off the island so he would be safe. 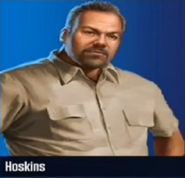 Vic Hoskins as he appears in Jurassic World: The Game