Earlier this year, I wrote a blog about how I had come to realize that category spamming is often lying. "Category spamming" refers to when people spend most of their time adding categories to pages. You look at the edits they've made, and there's row after row of edits marked with "Adding categories".

This blog is going to address a related problem: category abuse. Wikis make it easy to add categories to a page by putting a button for it after the categories list. You can add one category or you can add several at the same time.

Where this gets abused is when categories are used as an excuse not to write anything about the character. Categories are supposed to help organize a page. Too often, it's used to throw sound bytes at a character and not provide any proof that they're correct. It becomes easier to just put an "Arrogant antagonists" category on the page than to show how that character is arrogant.

I've acknowledged that some of this happens because people are familiar with the character. They know the character is arrogant, so they get a category that says they're arrogant.

But if you don't know anything about that character, how do you know those categories are telling the truth?

For example, I've seen a few episodes of SpongeBob SquarePants. Not many, and sometimes it's just part of an episode. I know that Plankton is obsessed with getting the Krabby Patty Secret Forumla and he'll come up with complicated schemes and inventions to do it. But I haven't seen enough to know if he commits sabotage or has been turned into a scapegoat. Does he severely punish people if they don't follow his orders or they can't make those orders happen? Is he actually married?

I don't really know. But if I go by the categories on his page right now, I'm supposed to believe that he is: 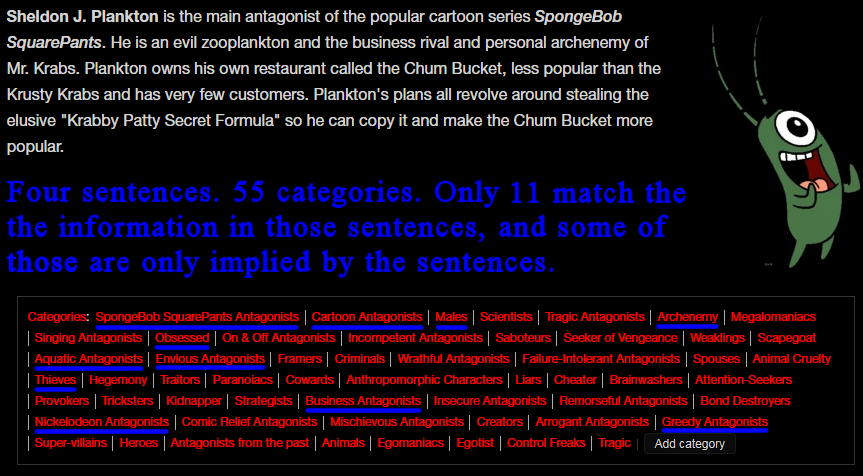 I've underlined the categories that have proof on the page that the categories are correct. Some of these are implied. If Plankton wants to make his restaurant more popular, then I guess he could be envious and greedy, though that's not stated on the page.

There are many pages on this wiki like this where there are more categories than sentences describing the character. People have taken the easy way out and kept clicking on the "Add category" button so they don't have to write anything. It's expected that we're just supposed to trust that those categories are true.

What needs to happen is we stop taking the easy way and stop slapping categories on a page. It's been done so much that it's being abused. People that engage in category spamming really aren't helping the wiki. They're adding fluff just to add fluff.

To help move us in that direction, I'm going to bring in a policy that I wrote for another wiki about category spamming. I'm going to mark it as an unofficial policy until it can be formally approved, but may issue blocks based on that policy if they're needed.

Part of it will cover cases where it's clear that the people that are category spamming are also deliberately adding false information in those categories. One recent example is the person who kept putting that characters were rodents/rats and lions when the character wasn't a rodent or a lion.

I consider deliberately adding false information to be a form of vandalism and I'll treat it as such.

There's a lot to do to clean up this wiki. One way we can get there is to stop adding to the mess by putting an end to category spamming and category abuse.