In the film, Stripe was the first one of the first batchof five Mogwai to be born when water from a paintbrush jar was accidentally splashed over Billy Peltzer's new pet, the MogwaiGizmo. Billy immediately saw that these five mogwais were different from the good natured Gizmo and Stripe was no exception. He had a white tuft of fur atop his head, which caused Billy to give him the name "Stripe." The other Mogwai appeared to think of Stripe as their leader. While Billy and Gizmo were sleeping, Stripe, with the help of the other four newly born mogwai, tangled the family dog Barney in the Christmas light decorations outside, at one point he even spits at Gizmo. The next night, he and his group managed to gnaw through the wire of Billy's nightstand clock and tricked him into feeding them some chicken legs after midnight. The very next morning, five cocoons had formed, and inside of them, Stripe and the other four ill-willed mogwai were undergoing transformations into vicious gremlins.

Later, while Billy was at work, the cocoons containing the Gremlins hatched. Sensing that Gizmo was alone and vulnerable, Stripe and the other four gremlins began to torture Gizmo, strapping him to a dart board while throwing darts around him. Eventually growing bored of this, Stripe threw the mogwai down the laundry chute before he and the others found their way downstairs, where they came across Billy's mother who was in the process of decorating for Christmas.  Sensing easy prey, Stripe's small band of gremlins attacked her. However she was able to fight back, dispatching three in the kitchen before being ambushed by the forth hiding in the Christmas tree. But Billy arrived home just in time, using one of the swords hanging on the wall to decapitate it and send its head into the fireplace, saving his mother. Seeing that he was now the only one left, Stripe fled.

Getting his mother to a doctor and reuniting with Gizmo, Billy tracked down Stripe to the YMCA. There Spike messed with the circuit breaker, setting off the alarm before jumping out, scratching Billy's stomach and (despite Gizmo warning Billy), jumping into the pool. The pool water enabled Stripe to spawn an entire army of gremlins to invade the town of Kingston Falls.

Stripe led his army as they paved their way through the town and wreaked havoc and mischief. One of their victims was Mrs. Deagle (who apparently, Stripe had it in for as he growled "Deagle, Deagle, Deagle!" when he saw her name on a sign), who they got by sabotaging her chair lift. Stripe and his gremlins soon began to party atDorry's Tavern, where they forced Billy's girlfriend Kate Beringer to provide them service. During a card game, Stripe showed his lack of mercy when he shot one of his own men for cheating. Kate eventually managed to escape when she discovered the gremlins hated bright light when she tried to relight one the gremlins' cigarettes and he backed away when she brought the flame close to him. Grabbing a snapshot camera, Kate used the flash to blind the gremlins to get to the door, only to find it not working when a masked gremlin had a gun pointed at her, but was saved when the headlights of Billy's car blinded the gremlin. Eventually, the gremlins found their way to the local movie theater where they gobbled up the snacks at the concession stand while a bunch of them played around in the projection booth, eventually getting "Snow White And The Seven Dwarves" playing. The gremlins found themselves loving it, singing along to the Dwarves' song "Heigh-Ho". Runing out of snacks, Stripe went to go obtain more popcorn at the concessions stand. Meanwhile, Billy, Kate, and Gizmo secretly made their way to the gas line underneath the movie screen while the other gremlins were distracted. At the concession stand, Stripe discovered that all the popcorn and candy had been cleaned out by his men. It was then he noticed a big red glowing "CANDY" sign in the window of a department store across the street. Back under the theater. Billy opened the gas pipe and lit a piece of cloth. He, Kate, and Gizmo were quickly racing to get out when the film stopped playing and the gremlins saw them behind the screen. The gremlins chased the three, who managed to race out the door, baracade it and get clear of the theater before the flame of the cloth reached the gas, resulting in an explosion that destroyed the gremlins...

Unfortunately, Stripe was still alive. The gremlin leader had left the theater to break into the department store he had seen, and just as he was coming out through the window he had smashed opened, his arms loaded with stolen candy, he saw the theater (and his army) blow sky high and screamed in anger. He was then spotted by Kate and ducked back inside the store. Billy, Kate and Gizmo followed the leader into the store and a search started, hoping to find him before he could find water and recreate his army. While Kate took Gizmo in search of the light controls for the store, Billy grabbed a bat and went to hunt for Stripe, tracking him through the store by the trail of wrappers from the candy he had eaten. Billy was led to the electronics department where Stripe surprised him by appearing on several TV screens before running to the toy department where he hid from Billy among the stuffed animals. When Billy reached the hardware section, Stripe attacked him with sawblades before using a small tricycle to flee to the sporting goods department. At same time, Gizmo (who was tired of feeling unable to help) snuck away from Kate to help Billy. Meanwhile, Billy, who had discovered Stripe's abandoned trike, found himself being ambushed by a ball launcher under Stripe's control which knocked him to the ground. In another part of the store, Gizmo, while looking for a means to stop Stripe, saw light shining on furniture and looked up to a window to see sunlight was coming in, which was lethal to him, meaning it was the same for Stripe. Back at Billy's fight with Stripe, the gremlin was shooting a crossbow, missing with the first, but injured Billy's arm with the second. Stripe aimed a third shot directly at Billy's head, but Billy blocked the arrow with a boom box which he threw at the gremlin. Tired of playing around, Stripe moved in wielding a chainsaw which he used to cut through Billy's bat. At the same time, Gizmo, now possessing the knowledge to stop Stripe, found a toy car and began driving around the store in search of Billy and Stripe. Just as Stripe was about to kill Billy, Kate found the light switches and turned them on, blinding the gremlin and making him lose control of his chainsaw which dragged him away from Billy. The chainsaw eventually reached the end of its extension cord and came out of the plugin Stripe had it, causing Stripe to stop. However, to his delight, he found himself in front of the gr

eenhouse section of the store, where its fountain (which Kate had accidentally turned on) was flowing. Grabbing a gun from a case, Stripe entered the greenhouse and waited for Billy. When Billy came in, Stripe (who had been waiting on the fountain's edge) fired multiple shots at him, leaving Billy helpless to stop him as he placed his finger in the fountain. Just as his new army was about to be spawned, Gizmo arrived in his car which he crashed right next to the blindcords of the greenhouse. Deciding to get rid of the mogwai for good, Stripe prepared to shoot Gizmo with his gun. Just as he was about to fire, the heroic mogwai grabbed the blindcord squeaking 'Bright Light!" and opened the blinds, exposing the gremlin leader to the morning sun. Screaming in agony and rage, Stripe slowly melted away into a skeleton. His body (now looking like a rotting corpse) then fell down into the fountain water. When Billy approached the fountain to check that Stripe was truly dead, with the gremlin's last ounces of life, Stripe's skeletal remains leaped out at him and fell down on the floor before melting away completely into a pool of green goo, ending the menace of the evil gremlin.

In the sequel Gremlins 2: The New Batch, Stripe was (according to the writers and director Joe Dante) in a way reincarnated and reborn as Mohawk and t

his gremlin reincarnation of Stripe proved to be much more wicked and fiendish, but not as intelligent. His leadership qualities that he had in his first carnation seemed to have diminished (even allowing the Brain Gremlin to take command of the army) and he spent most of his time being a loner, usually torturing and abusing Gizmo (perhaps for revenge for being exposed to sunlight in his previous life).

At one point he saw Billy, seeming to recognize Billy from his previous incarnation he tried to kill him with an Uzi machine gun, but Billy escaped from him. Eventually, he drank a genetic sample from a spider and became a vicious gremlin/spider hybrid. In the end, however, he once again met his end at Gizmo's hands. Having had enough of being pushed around by Mohawk, Gizmo fired a flaming arrow at him, killing the evil gremlin once again.

Behind the scenes Edit

Stripe is the main villain in many Gremlins video games and appears in most of them. He is one of two playable characters (the other being Gizmo) in "Gremlins: Unleashed" for the Game Boy Color and "Stripe vs. Gizmo" for the Game boy Advance. In both, he is the final boss if the player plays as Gizmo. If the player plays through the game as Stripe, Gizmo will be the last boss instead. 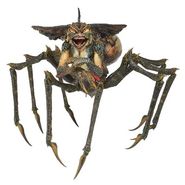 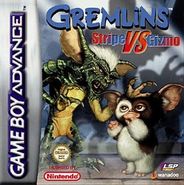 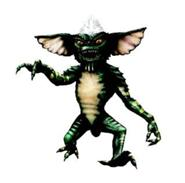 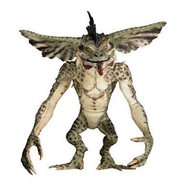 Add a photo to this gallery
Retrieved from "https://antagonists.fandom.com/wiki/Stripe?oldid=133732"
Community content is available under CC-BY-SA unless otherwise noted.