Sidney "Sid" Phillips is the main antagonist of Toy Story, and a minor character in Toy Story 3.

He was voiced by Erik von Detten.

He is Andy's neighbor until Andy moves, and is known to destroy and torture toys. Many of his toys are either destroyed, have pieces missing, or have pieces replaced with other toy parts. He is also shown scaring his sister and destroying her toys in various methods, including exploding, burning, and decapitating them. He also enjoys skateboarding and his shirt bears the logo of Zero Skateboards. The toys mention that he is consistently kicked out of summer camp and in the audio commentary on the tenth anniversary DVD, the directors mention that he is a bully. It is also implied that he doesn't have the best home life. His parents don't make any major appearances; his father is only glimpsed briefly asleep in a chair with the TV on.

He seems to be the only human depicted in the film to have witnessed toys actually come alive. At the end of the first film, Woody and Sid's mutant toys decide to rescue Buzz by scaring Sid, which causes him to becomes very frightened of toys. Woody pulls the last straw on him by coming alive and telling him to take good care of his toys or else. This causes Sid to panic and run back into his house, then to his room when his sister scares him with her toy doll.

Sid does not appear in the second film, but is mentioned once by Buzz during the toys' mission to rescue Woody from Al McWhiggin. Sid also appears in the four-issue Monsters, Inc. comic mini-series produced by Boom! Comics. In the third film, an adult Sid makes a brief appearance as a garbageman with a small beard, recognizable by his characteristic T-shirt. He has no real dialogue in this role, and is instead depicted singing a song on his MP3 Player.

In this film, Sid is much older, and is now a garbage man. 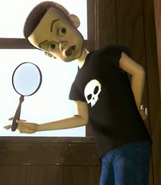 "We have ways to make you talk."
Add a photo to this gallery
Retrieved from "https://antagonists.fandom.com/wiki/Sid_Phillips?oldid=134637"
Community content is available under CC-BY-SA unless otherwise noted.