Antagonists Wiki
Register
Don't have an account?
Sign In
in: Murderers, Destroyer of Innocence, Psychopath,
and 25 more

Sgt. Hilde Schmittendorf is the major antagonist in the video game called Dead Rising 3. She is a of the much psychopaths that appears in Dead Rising 3.

Hilde first appeared on television next to Hemlock his superior, meanwhile, Nick soon starts to investigate the police at the station, he while he was doing his mission, he soon sees, Hilde with his subordinates, and she soon puts the drive on your breasts. She also orders to kill the wife of the man who asked for help, then she kills him too. Disgusted by his cruel and sadistic behavior, Nick begins to question her, she then tries to flirt with him, but Nick rejects her. She then orders her soldiers to kill Nick, and begins a very unbalanced battle for Nick, but he kills all of Schmittendorf's soldiers, and then he knocks her down  from a buildings, and he learns on her, she at the end says no it was fair and dies, he stays with his drive he got. 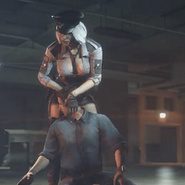