Rhinomon is a rhino-like Digimon and one member of the Bagra Army in Digimon Fusion. 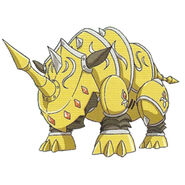