Otoya Takechi also known as Jack the Ripper of the 21st century, she is main antagonist in the episode three of the animes series Akuma no Riddle, already in the tenth episode, she act more as secundary antagonist. She is a serial killer that terrified the population, although her do part of Black Clash, by the fact if she wins would go win a request, even after having the chance to redeem helself and go to the good side and befriended Haru, she refused and continue with her hunt for sadistic pleasure.

Nothing is known about Otoya's past or how she became a Assassin, or how she got the tittle of Jack the Ripper of the 21st Century, after she killed 29 people mutilating them with scissors. She has no record of her previous life or that of her family, yet there is a theory within the anime universe that she murdered her entire family, and a detective was investigating to get her. Even part of that was the reason she joined Black Class.

Otoya was the first assassin to attempt to kill Haru after writing II'I kill you.

Later, Otoya and Haru are talking on a bench sitting, Otoya gives a bouquet of flowers to her, saying that she is protecting her from Shiena, more suddenly, she says that everything she said to her lies and throws the bouquet on Haru's face making her faint. Otoya then takes Haru to a botanic garden as the class had been the day before, she then tortured slowly getting to have a sadistic pleasure with it. Otoya listens to the bullfinch on her cell phone, while she tries to talk to her that she is being tortured by Otoya, she discovers where Haru is because Mizorogi has taught them about the bullfinches.  Otoya then finds the place where Haru is smitten and is close to giving the final blow, but Tokaku appears and cuts with a shot in the face of Otoya scarring his face, Otoya simply goes towards Tokaku blocking his bullets and defeating her, however, when she was about to give the final blow she is poisoned by Haru for the same bouquet flowers she used against Haru.  She remained unconsciouns, until the whole time until tomorrow, when Nio arrived informed that she was expelled that she should leave Otoya then tries to convinces her without success, then Otoya tries to stab her with her scissors more Nio deviates and easily defeats her taken out of school ad possible trapped in prison despite not showing it.

Escape in Prison and Return[]

After stabbing a guard with his scissors and fleeing from the prison Otoya then returns to school to take revenge on Haru, she goes to school more is caught and held against her will by Sumireko Hanabusa. During the attempt on the murder of Haru, Otoya gets loose with a knife and one of changes idea about killing Haru and tries to kills Hanabusa but she not is match by Hanabusa that the same throws it out, after she wakes up more is confronted by Nio Hashiri that hypnotizes and is arrested again.

In the final episode, Otoya appears doing forced labor in a garden and singing waiting to be released.

Otoya is a social person who socializes with people and earns their friendship easily, mainly Haru always trying to socialize her to gain the trust. But nevertheless, all this has not been done since it is shown to be very manipulative and capable of anything to achieve if objective. Always when she is close to killing someone she becomes much more agressive and intimidanting, she tortures her victim and gets excited about it's speech gets wet. 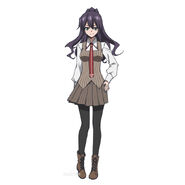 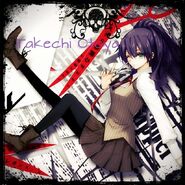 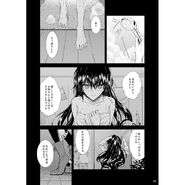