Notice: most of the information below is contradicted by what is in the Zootopia Junior Novel. Correcting the false information would require spoiling the movie, which will come out on March 4, 2016. After it premieres, the page will be updated to show exactly what role he plays in the movie.

Mayor Leodore Lionheart is the hidden main antagonist of the 2016 Disney animated film Zootopia. He is the noble ruler of Zootopia, who plots to kill vegetarians, by infecting meat eaters and making them wilder, so he can be rich and remain mayor forever.

Role in the film

He at first speaks on the stage introducing Judy Hopps to the public, thus he stands infront of Bellwether, his assistant who was supposed to speak. Later, when Judy Hopps and Nick Wilde unite to find a suspect of the missing otter case, he secretly hired his assistant Bellwether to shoot animals with injection shooting dart guns, so they will turn into total wild beasts. After Judy and Nick were caught by Mr. Big, and were released by him to find Manachas, it was revealed that Manachas was a wild beast. Later, at night, Lionheart was seen to trip Bellwether by mistake, as he walked out of the office, leaving Bellwether to complete his plans. Then, Judy and Nick came back to Zootopia, and they found the limo of Mayor Lionheart near a lab where wolves have been working. Then, Judy and Nick confront Bellwether, asking her angrily what Lionheart is up to. Bellwether tries to hide it, but exposes his plot from fear. She reveals that Lionheart plots to kill vegetarians through turning meat-eaters wilder, and that he is about to create an ultimate weapon, which will turn all meat-eaters into total beasts. Lionheart entered the lab and commanded Dr. Madge to hand him the DNA of every animal in Zootopia. Then, a wolf reported that Bellwether hacked into camera 13. Lionheart commanded the wolf to kill Bellwether, and take all the wolves with on the mission. He stated to Dr. Madge that nobody messes with their future king. Dr. Madge then stated that what he is doing to Zootopia isn't fair. However, Lionheart replied that he had a hard life, under the shadows of other mayors, and that he won't let anyone ruin his creativity. Judy, Nick and Bellwether succeeded to see that on camera 12, and then, Nick & Judy go and sneak into the lab, by tricking the wolves into howling. Then, the wolves broke into the passage, however, they took care of the wolves, breaking into the lab itself. Then, Judy and Nick spotted a machine called the Ultra-Night. The purpose of the machine is to turn every animal into an ultimate beast. However, Lionheart entered with the wolves, and commanded the wolves to "eat them alive". Judy and Nick escaped the wolves and broke out of the lab. Lionheart then commanded them to kill Bellwether, and stated that without her full and dead DNA, nothing will work. The wolves killed Bellwether, and Lionheart declared celebration in his city hall. However, meanwhile, the wolves injected Bellwether, and put her blood into the Ultra-Night. Meanwhile, Judy and Nick were hacking Lionheart's cameras, however, the police and their head cheif Bogo caught them doing so, chasing them as they (Nick and Judy) headed to the train station. After that, the wolves worked the machine, turning every meat-eater into a total wild beast, however, leaving the vegetarians as they are. Then, Judy and Nick caught the same train as two wolves did, and Bogo had to wait for the next train. On the train, the two wolves were beaten up by Nick, and a file fell out of the hand of one of the wolves. Then, Judy and Nick presented the file infront of Bogo, and Bogo said that he will take of Lionheart, but that they have to take care of the beasts. The beasts were cured by Judy's night-howler syrum, and Lionheart battled Bogo. However, Lionheart through on him a needle which he had in his pocket, which turned Bogo into a wildebeest. Bogo then rampaged his place, finally letting him run out of the lab, as he outside got caught by the awaiting police, finally getting arrested, as Judy Hopps stated it's a hassle.

Mean, cruel and egoistic, as he would do anything to level up. He seems to spark his hatred on Bellwether, as he is very manipulative and aggressive towards her. 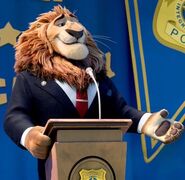 His first speech
Add a photo to this gallery
Retrieved from "https://antagonists.fandom.com/wiki/Mayor_Leodore_Lionheart?oldid=14651"
Community content is available under CC-BY-SA unless otherwise noted.