Josiane ''Jo'' Sobral Ramirez Matheus is the main antagonist of the Brazilian Soap Opera known as ''A Dona do Pedaço''.

She is portrayed by the actress Agatha Moreira was also had already interpreted Domitila and Giovanna.

Josiane is the daughter of Maria da Paz and Amadeu, Josiane is ashamed of her mother and her way of dressing. She dreams of being a famous blogger, she also dates Téo who disapproves of several of her attitudes. However, she soon meets Regis a millionaire man and they date, the two then strike a blow against Maria da Paz. However, as times passes, she ends up being blackmailed by a man, and she kills him by pushing him and killing him. She is later blackmailed by Fabiana, but then when Jo is arrested she will soon become evangelical and it seems that she had regained herself, but this shows itself as a facade when she simply kills Regis in cold blood showing at the end of the novel that she does not cared about him. 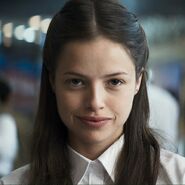