Born on February 6, 1997 in Newton, Iowa, Jeremy was despised by his religious mother Kendra from the day he was born. Her hatred of him stemmed from her initial pregnancy with twins, and the other child was later consumed by Jeremy while they were still in the fetal stage. When Jeremy was ten years old, his father left the family and moved to Wisconsin. By the age of thirteen, Jeremy had already established a juvenile record that included various offenses, including four counts of petty theft, three counts of battery, four counts of battery, one count of sexual assault, and one count of animal cruelty. Also, according to Kendra, she had tried to kill her entire family by putting rat poison in her Thanksgiving turkey and had killed her neighbor's dog. On October 10, 2010, he twisted the arm of his sister, Carrie, until it broke and had to be rushed to the ER. A doctor became suspicious and contacted Social Services, who filed a report on the incident. At this point, his mother could no longer bear it and left him in a hospital in Nebraska, intending for it to apply to the state's Safe Haven child protection law. For the paperwork, he claimed his name was Niko Bellic. Nine days later, while he was there, he was picked up by Monica Archer, who did volunteer work there and was allowed to spend the night with her family. That same night, he killed the entire family and started his family-killing spree while fleeing back to his home in Newton, intending to get revenge on Kendra and Carrie.

After killing the Bennett family, Jeremy mounts the Reverend Louis Hannum. While on the road, Jeremy, probably acting on his psychopathic tendencies, murders Hannum, causing his car to crash into a ditch, then dissects Hannum's arms. He then walks into a park and sees the Riverton family, who have stopped because daughter Amber wants to go to the bathroom. Jeremy gains Mother Nancy's trust by saying that he got off a bus headed to Chicago to go to the bathroom, but the bus left before he could return and his cell phone was still on board. Nancy decides to take him to the local police station, but after seeing the officers fighting a gangster, she changes her mind and takes Jeremy home, to the enjoyment of Amber and son Zack. There, Jeremy gives Nancy the Archer family's house number before Nancy distracts her by slicing chicken with a kitchen knife. Meanwhile, Rossi and Spencer go to Archer's house, having realized that the suspect is a teenager and that Monica Archer willingly took him home because she trusted him. There, they find a message sent by Nancy about Jeremy at his house; since none of Monica's children were named Jeremy, they realized that Jeremy had already attacked another family. Morgan and Prentiss rush to the house and find the children tied up and Jeremy and Nancy missing. In Nancy's truck, Jeremy talks to her and criticizes Zack before eerily declaring that Amber will get "hot" when she grows up. Nancy then stops at Jeremy's request, and Jeremy asks if she is relieved that he will be out of her hair. When Nancy denies it, Jeremy angrily stabs her in the stomach before stealing a skateboard and setting off. By the time the BAU identifies him, Jeremy has returned home to Iowa and taken his sister hostage. When Kendra confronts him, he forces her to admit what happened to her unborn twin. Morgan and Prentiss broke into the house and held him at gunpoint. When Jeremy claims that they can't shoot a child, Morgan promises to kill Jeremy if he even considers harming his sister, causing Jeremy to tearfully say it was just a joke. As he is escorted from the house by Morgan, he smugly proclaims that he will "see him in 5 years" believing that he will be released at eighteen. Morgan tells him not to count on that and agrees to attend each of his parole hearings to prevent that from happening before shoving him into the police car and banging on the door. 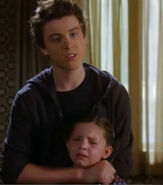