Hugh Hammer was a main antagonist in The Princess and the Queen or also the black and the greens. In a novella spin-off of A Song Ice and Fire.

During a dance of the dragons, so the princess Rhaenyra Targaryen tries recruit the two dargons to his arm. Many not agreed with decision Rhaenyra about to the dragons. Between they was the bastard Hugh Hammer which King Jaehaerys allowed with which Hugh mounted in dragon. Hugh fough in battle of the Gullet for the Blacks and Hugh was so named as Lord of Bitterbridge for this. But in First Battle of Tumbleton, Hugh together with other dragonrider, Ulf the White. ends for betray and defeat to Black Arm.

Which after the half-brother of Rhaenyra, Aegon II was disappeared and his brother Aemond had died. Which after when Hugh is captured he said he should be King, and had to right of being a dragon. Which after his arrogance the Prince Daeron played wine in face of the Hugh Hammer, Hugh threatened hit in Daeron. which after of match between Hugh and Roger which Sor Roger defeated him. So they decided kill to two traitors for cospirancy, Sor Jon Roxton stabbed Hugh killing, soon after Ulf was murdered for poisoning. 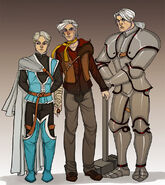 Hugh together with his partner Wulf the White

Hugh at the dragon
Community content is available under CC-BY-SA unless otherwise noted.
Advertisement