Antagonists Wiki
Register
Don't have an account?
Sign In
Advertisement
in: Psychopath, Destroyer of Innocence, Barbarians,
and 64 more

Hody Jones is a humanoid shark man who is Fishman Island Arch's main antagonist of One Piece.

In the midst of all this, as One Piece became more serious the villains would become worse, and Hody would be among One Piece's crudest villains along with Donquixote Doflamingo and Akainu.

He is a cruel psychopath, amd utterly misanthropic to humans for killing Queen Otohime for wanting to be his friends, and made every effort to accuse a human, he was also willing to kill Shirahoshi, whom he mocked for not feeling no resentment for him. And as Arlong he hates humans, and unlike them, he just doesn't excuse or principles for the atrocities he does. he torments and kills humans for no reason. And he has no scruples to do with anyone, whether by specimen, and unlike Arlong, who also includes his race and because of this Hody is considered one of the most evil villains to appear in One Piece.

Hody Jones who grew up fed by the hatred of humans, and breathed out by Arlong, but unlike him, Hody never wanted to be harmed by humans, and he hates them and wants his race to be erradicated for no apparent reason, and that the other reason is that it was racism, and unlike Arlong, Hody has no qualms about harming a fishman especially those who are friendly to humans. And his hatred for humans is so fierce that it led him to kill his own mermaid queen Otohime and accused humans for this crime, to make Fishman Island hate them all. Years later Hody then decides to take over Fishman Island along with his team and his new ally Vander Decken IX. He gains a lot of power in a fast way because his coup state has been prepared with every last detail. Everyone except Luffy and his class. 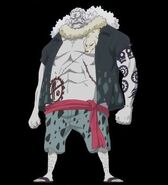