Dr. Harleen Frances Quinzel, known better by her alias Harley Quinn, is the secondary antagonist in the Batman franchise. She was a psychiatric intern at Arkham Asylum who became fascinated with The Joker and fell in love with him. The Joker's many fake backstories won her sympathy and she turned to crime and became The Joker's girlfriend. She was first introduced in the Batman: The Animated Series episode Joker's Favor.

A graduate from Gotham State University, Harleen Quinzel got herself an internship at Arkham Asylum. Having had an interest in the Joker's psychology, Harleen offered to be his psychologist. However, Harleen was manipulated and seduced by the Arkham inmate, leading her to assist him in his escapes. Upon being caught, Harleen turned to crime and became the Joker's girlfriend, becoming known as Harley Quinn.

On one occasion, after being blasted away in a rocket by the Joker after he realized he was starting to have feelings for her, Harley met Poison Ivy, and formed a friendship with her fellow criminal. The two formed an alignment to take revenge on the Joker and Batman. However, in the confrontation that ensued, the Joker apologized to Harley, who forgave him, much to Ivy's disgust. However, Ivy remains a close friend of Harley, and the two often partner up when Harley and the Joker break off from each other.

In DC's relaunch of the comic series, Harleen is portrayed as the oldest of four siblings, and sought to explore criminal psychology. Becoming a doctor at Arkham Asylum, Harleen went undercover as a patient in an attempt to explore the minds of the inmates at Arkham. The Joker, who saw through her disguise, manipulated and seduced her, leading her to develop a crush on him. Upon being discovered, she broke the Joker out of Arkham. Following this, the Joker brought her to Ace Chemicals, where he shoved her into a vat of chemicals, altering her appearance and causing her to lose touch with reality. Now using the name Harley Quinn, Harleen became the Joker's lover and ally.

After a falling out with the Joker, Harley became a member of Amanda Waller's Suicide Squad. Upon learning that the Joker had been presumed dead, Harley turns herself over to Gotham Police Department to recover the Joker's skinned face. She succeeds, and later abducts Deadshot, another Suicide Squad member, and forces him to wear the Joker's face. Believing that Deadshot is the Joker, Harley attempts to have a conversation with him. However, Deadshot shoots her, though she survived. Harley later rejoined the Suicide Squad.

After Deadshot's apparent death during one of the squad's missions, Harley attended his funeral. There, the Joker returned, and offered Harley a chance to rejoin him. Forced to disguise herself in the Joker's old Red Hood costume, she met Batman at a chemical mill, where she trapped him in a tank. She later got into a fight with the Joker, who infected Harley's hyenas with rabies and set them loose on her, forcing her to kill them. She was later sent to an infirmary, where a living Deadshot came to see her. She broke off her relationship, insisting that she was too good for him and the Joker.

Once an ambitious and aspiring university graduate, Harley has always held a fascination for criminal psychology. After being inveigled by the Joker, Harley became his loyal follower and sidekick. Harley has constantly sought the Joker's love and approval, believing that he truly cares about her. However, this has led to her willingly receiving harsh treatment from the Joker, who merely sees her as pawn (sometimes). Harley occasionally falls out with the Joker and tries to strike out on her own, but will usually return to the Joker, often after receiving an apology. When not allied with the Joker, she often hangs out with Poison Ivy instead.

Harley seems to be the only person to bring out a softer side in both the Joker and Poison Ivy.

Harley is seen as one of the more sympathetic of Batman's rogue gallery, and Batman has, at times, made attempts to redeem her. Harley has shown she has a conscience at multiple times for her actions, and an ability to do good. Despite this, she is still a dangerous criminal willing to murder and hurt innocents in order to further her goals, or to prove herself to the Joker.

Despite her bubbly and ditzy nature, Harley can get quite vicious, brutal and psychotic when angered or pushed too far; as she would attack or kill anyone who would harm the Joker, Poison Ivy and herself. Harley has an extreme hate for Batman and seems to have a intense rivalry with Batgirl.

Harley Quinn and the Joker 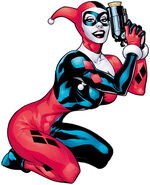 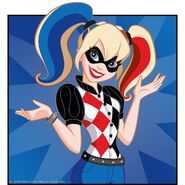 Harley Quinn in The Batman. 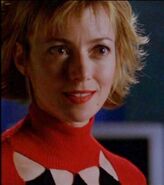 Harley Quinn in Birds of Prey.