The Grand High Witch is the main antagonist of the 1983 children's book The Witches by Roald Dahl and the 1990 and 2020 dark fantasy film adaptations of the same name.

She was portrayed by Anjelica Huston in the 1990 film, who also plays Baroness Rodmilla de Ghent in Ever After, Emily Grierson in the television adaptation of A Rose For Emily, Miss Battle-Axe in the film adaptation of Horrid Henry and Miss Harridan in the 2003 film Daddy Day Care. In the 2020 film, she will be played by Anne Hathaway, who also played Catwoman in The Dark Knight.

Having shown her plan to be a success, the Grand High Witch announced that the ancient witches, who had served her for many years, would come and receive the readily-prepared formula, as they were too old to get the ingredients themselves. As the meeting came to a close, Luke, who had hoped to escape, was discovered when one witch smelled him. The Grand High Witch ordered the other witches to capture him and take him to her. The witches obeyed and the Grand High Witch poured the formula into Luke's mouse, transforming him into a mouse. Believing Luke to have been disposed of, the Grand High Witch returned to her hotel on room 454.

Before she can murder Helga, Bruno bites her, distracting her and causing the formula to finally take its toll. As the Grand High Witch begins to transform, she is berated by Helga for her cruel actions. Enraged, the Grand High Witch declares that she isn't finished with Helga yet, but transforms into a mouse. Helga manages to trap her under a glass cup before alerting Mr. Stringer, who had ordered the kitchen staff to eliminate the recently-transformed witches. Mr. Stringer, upon being told that the Grand High Witch is especially contagious, removes the glass cup and slashes her witch a butcher knife, killing her and ending her reign of terror for good.

The Grand High Witch with her mask on

The Grand High Witch without her mask 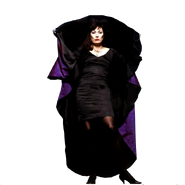