Armitage Hux, also known as General Hux, or simply Hux, is major antagonist of the Star Wars sequel trilogy. He is the son of Brendol Hux who served the destroyed Galactic Empire. Hux serves Supreme Leader Snoke as the general of the First Order.

He is portrayed by the irish actor Domhnall Gleeson.

A young, ruthless officer in the First Order, General Hux has complete confidence in his troops, training methods and weapons. Hux is commander of the First Order's facility, Starkiller Base. Unlike Kylo Ren, who is insecure and conflicted, Hux is characterized as being more overtly evil.

Hux appears in a uniform with a dark cloak, reminiscent of an Imperial military uniform. Hux is a human male with red hair and a slender body.

General Hux is an evil tyrant who is extremely ruthless as he is willing to kill billions of living beings in order to achieve his goals. He shares a rivarity with Kylo and hates him to the point that he betrays the First Order after his rival became the Supreme Leader. However, this betrayal is motivated only by his desire to have Kylo killed and he shows no remorse towards his past actions.

Working for the First Order

Hux works in the program that creates Stormtroopers, which are stolen from their homes as children to be turned into soldiers for the First Order.

The Search for BB-8

At first, Hux attempts to capture Finn and Poe who are escaping in a stolen TIE fighter. He later finds out that their ship crash-landed in Jakku, he sends troopers to look for them at the planet. Kylo Ren questioned him if clone troopers would not be better and trustworthy soldiers, but Hux was offended that Kylo doubted the efficiency of the First Order troopers.

Kylo Ren and Hux are later called by Supreme Leader Snoke, to talk about the plans against the Resistance. Hux informs Snoke that the Starkiller Base superweapon which is almost ready, able to allow the First Order to massacre the New Republic. Snoke orders him to oversee preparations of the superweapon.

Hux makes a speech to the the Stormtroopers, before firing the weapon for the first time. Hux states that it will be the end of the Republic, the regime which secretly supports the Resistance. After the speech, the superweapon was fired on the Hosnian system, destroying and killing billions of people.

Later, after Kylo failed to interrogate Rey and seeks Snoke's help, Hux appears, stating that Kylo Ren choosing to capture Rey instead of continuing to look for the droid resulted in the not getting the map, which might be already at the hands of the Resistance.

The Collapse of Starkiller Base

When the Resistance manages to destroy the thermal oscillator of Starkiller Base, it starts to collapse, so Hux prepares for retreat, and he goes to inform Snoke about his failure. Snoke orders him to bring Kylo Ren back in order to complete his training.

In the L.E.G.O. game, Hux shows the map to Snoke and celebrates while destroying the New Republic. He later flees from Starkiller Base, thus leaving Kylo Ren behind to die.

General Hux is very much inspired by Adolf Hitler, the ultimate leader of the Nazis. Many people criticize his evil character, as they say he is much of a real life dictator, and ultimately a Nazi. Even Domhnall Gleeson always mentions how evil Hux is, stating that he is a tyrannical brute. 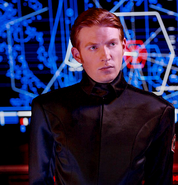 General Hux in his office.

General Hux's picture with Stormtroopers in the background.

Hux along with the First Order military.

Hux's speech in a different position

Hux's toy with his character on the box.

Hux and Kylo Ren in a dark room with Snoke's hologram figure. 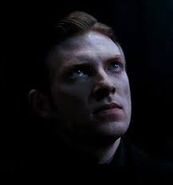 General Hux while he the superweapon fires at the Republic's capital. 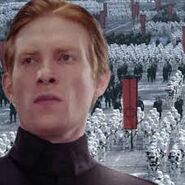 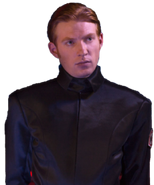 Hux talking to Snoke as Starkiller Base collapses. 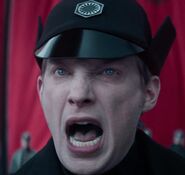 Hux that the Stormtroopers were kidnapped as kids 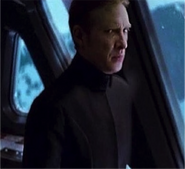 Hux after finishing his speech.
Community content is available under CC-BY-SA unless otherwise noted.
Advertisement