Frederick Charle "Freddy"/Fred Krueger, is a legendary serial killer and the main antagonist of every film in the Nightmare on Elm Street franchise as well as the entire series. He was a sadistic child murderer in his life, and when vengeful parents found out, they burned him alive in his boiler room hideout. Unbeknownst to them, Freddy made a deal with three "Dream Demons" and was resurrected as a malevolent spirit, seeking revenge on the parents of Springwood, Ohio by killing their children in the one place where they could never protect them; in their dreams, usually with his signature clawed glove.

His biological mother, Amanda Krueger was a nun, who gave birth to Freddy, after she was raped hundreds of times after being accidentaly locked in a cell of psychotic men in the 1940s. Throughout his childhood, he was sent from orphanage to orphanage, where he constantly endured humiliation by the other children, who thought him a freak for the way he was born.

He was eventually adopted by an abusive alcoholic man named Edward Underwood, who constantly neglected and physically abused him, until Freddy finally retaliated for all those tormenting years by killing him with a razor blade when he was a teenager.

Freddy then moved to Springwood, Ohio, where he secretly became a child murderer, killing dozens of children on Elm Street. His action eventually earned him the alias "Sprinwood Slasher", where he killed several kids inside a boiler room within an old power plant where he used to work. When his wife, Loretta, discovered his secret, he strangled her in front of his daughter, Kathryn, who also found out about the murders, but promised she would never tell. A little while later, Freddy got caught trying to kill the Blocker twins, 2 sisters who happened to be the daughters of Lieutenant Blocker, a cop. Freddy was arrested and put on trial, but was released on a technicality preventing the court from convicting him. So, the furious parents of Springwood formed a lynch mob and tracked Freddy to his boiler room hideout where he was preparing to skip town, and lit the building on fire with torches and Molotov cocktails, burning him to death. However, 3 dream demons approached him before his death, where they made a deal so that he could come back as a demon and continue his killing spree from beyond the grave on the children where they cannot protect themselves; in their dreams. Freddy was made immortal because of this and began a new killing spree, making the murders look like accidents or suicide.

A Nightmare on Elm Street

From here, Freddy invaded people's dreams, where he would kill them using his clawed glove, or else manipulating the dream world in a way to reflect the victim's fears and personality. Whatever he did to them in the dream world would affect them in the real world.

Freddy's first victim in the film was Tina Gray, whom he killed by slashing her across the chest with his clawed glove. He then stalked Nancy Thompson in her dreams and killed Rod Lane, Tina's boyfriend who was accused for killing her, by hanging him with his blanket. Nancy pulled his hat out of the dream so she devised a plan with her boyfriend Glen to catch him, but Glen fell asleep, and Freddy pulled him into his bed and shot him upward in a fountain of blood, killing him. Nancy eventually pulled Freddy out of the dream world and set him on fire. However, he killed her mother Marge by smothering her with his flaming body, vanishing her into the bed. Nancy's father, Donald, witnessed this. Afterwards, Nancy destroyed Freddy by turning her back on him and taking away his power, however he was still able to temporarily trap her in a dream world where she was trapped in a red and green car with Glen, Tina, and Rod to end the film.

Five years later, Freddy was unable to return so easily, until he invaded the dreams of Jesse Walsh, who moved into Nancy's house sometime after she left. He possessed Jesse on several occasions, at one point killing his coach, Schneider (whom Jesse disliked) by slashing his back in the shower.

Soon, Jesse went to a sleepover at his friend's house, Ron Grady. But when they fell asleep, Jesse awakened and started screaming and crying in a pain as Krueger gruesomely came out of him. Ron tries to escape but the door is jammed, leaving Ron to get strangled and then stabbed in the torso as Krueger laughed and waves at him. Freddy then took full possession of Jesse at Jesse's girlfriend, Lisa Webber's house during a party, killing several of the guests. In the end, Lisa was able to get through to Jesse, who fought Freddy from within and burned him to death using his power, releasing Jesse unharmed. However, the ending of the movie implies that Freddy returns; he is seen stabbing Kerry from behind (or from the inside) while she is on the bus with Jesse and Lisa. Whether this is a dream (and by who), or if he was possessing her, and whether or not Jesse or Lisa survived, is unclear.

Freddy soon returned to his old ways of killing people in their dreams. Soon, all surviving teenagers of Springwood - Kristen Parker, Roland Kincaid, Phillip Anderson, Taryn White, Joey Crusel, Will Stanton, and Jennifer Caulfield - were committed to Westin Hills Asylum, as they were trying to avoid falling asleep. Nancy Thompson began working there, and Dr. Neil Gordon, another worker, was seeing the spirit of Freddy's mother, Amanda Krueger under her alias "Sister Mary Helena". Freddy soon began killing everyone one by one. First he used Phillip's veins to control him like a puppet to make him fall out of the window to his death, making it appears as a suicide inside a nighmare Phillip was having. Then he smashed Jennifer's head against the TV yelling one of his most famous lines: "This is it, Jennifer, your big break in TV!". When Kristen, Neil, and the others entered the dream world to use their powers and fight Freddy, Joey was attacked and trapped by Freddy, putting him into a coma.

The Dream Warriors (Kristen, Taryn, Will, and Kincaid) fought Freddy alongside Nancy while Neil and Donald went to the Penny Bros. Auto Savage junkyard to bury Freddy's bones on "hallowed" ground using holy water, a cross, and prayers to laid his unquiet spirit to rest.

A Nightmare on Elm Street 4: The Dream Master

A Nightmare on Elm Street 5: The Dream Child 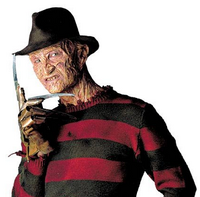