Killing and torturing humans and ghouls

And give freedom for the ghouls

No information
Eto Yoshimura is a one-eyed ghoul and the founder of group Aogiri Tree who a organization who has ambition of have an world who the ghouls not would hunted only per being ghoul she is the One-Eyed Owl who the responsible of death wife Kureo Mado who would take the insanely, Eto also is a novelist of terror who writes about a woman who has some hate for the world who are the books who Ken Kaneki and Rize Kamishiro who read.

In the end of second season of Tokyo Ghoul of series is revealed who she so is daughter of an human Ukina with Kuzen Yoshimura, Eto a ghoul has the Cafe Anteiku in who Kaneki works, together with members of Aogiri with go she for Cafe Anteiku, because both had assited the fights of far. She also is the main of series anime Tokyo Ghoul, together with Rize Kamishiro, Kureo Mado, Seidou Takizawa and Yakumo Oomori.

Eto which born of an ghoul Kuzen Yoshimura and a human Ukina. She his mother Ukina was forced the if murdered by Yoshimura he which not could if oppose to V organization. After from some time Yoshimura with very sadness left Eto in 24th ward together with Ukina journal's. later time in which she stayed in 24th ward she was with hate from world she devoured several ghoul and has his Kakuja. After from get your Kakuja, she begins attacking CCG and the killing insvetigators from CCG, what took CCG give the nickname SSS and later would be One-Eyed Owl. Yoshimura knowing of this covered the Eto, more the CCG already had discovered truth when he only hurt the investigators from CCG and not them killed. In years ago Yoshimura left Eto with a Ghoul named Noroi for take care her, which later he would go if named Noro after from transformation, Eto also is the creator from Aogiri Tree together with Kishou Arima which was created before from series.

As ghoul Eto has a personality much sadist cold-blooded forever expressing joy on suffering from others, perhaps his nature sadist and violent could for time which she stayed in 24th ward, for that she no has doubts about killing human and ghouls. In his form human she had a personality very childlike and calm, she also is enough playful at times, many of times sleeping when should autograph, as said Haise Sasaki about a of work her which is a story about an woman full of hate with world.

When she this in his mission; she uses a costume infantilized which are a bandages in all body, mantle dark pink and an sheet in neck. As Takatsuki Sen, she uses robes dark blue with a esplession very sleepy in face, she has hair green, and his hairstyles this forever messy.

Eto participated at the meeting in who Kaneki was taken of the Tatara, on the end of meeting, Tatara left the subjects of the Aogiri Tree to Noro. Tatara also predicted which Doves would come on and ordered to Noro follow their plan, so after, Tatara was with Eto for being meet to companion which was waiting for them.

Eto was together with other members of the Aogiri while Tatara was interrogating at Dr. Kanou's assistant about where was his location. Eto talked with Naki about at Yamori's death so she suggested which Tatara should have killed Kaneki when had chance. She being found with the twins Kurona and Nashiro Yasuhisa. She mocked of twins about his past, she also was doing malicious. A certain turn which his tactics had dominated her. After she appeared for back of the Kazuichi Banjou and breaking much of his ribs.

Later after, Eto being together with Kanou on his control room and watch to confrontation between Koutarou Amon and Kaneki, she demonstrates a interest in Amon but of what at Kaneki, before of leave at installation together with Kanou.

She appeared how Sen Takatsuki at a events. She arrives delayed to and asks excuse to big group of fans which was waiting for her. She cheerfully give autographs and taking photos with his fans, Kaneki and Hinami Fuguechi participate of event capturing his interest. She stay with Kaneki which he had some details hidden in his book, while she does a connection with Hinami. After which he leave, Hide arrives to event and he conversation with the author. She suggested his interest in write about a ghoul.

Some time later, she pops up and notes Hinami taking coffee with Shuu Tsukiyama and waiting until which she stay alone, she being of Hinami and offers honest advice about his inability to help Kaneki. Takatsuku affirms have past moments difficult on the past, and gives his card for she ever which need offering his help at her.

After she do a visit to CCG, and being meet with Amon answering his questions, in certain hour Amon stay frustated for his behavior provocative, and but turn him cooperates. She reveals at he a conspyracy involving the CCG and a company called Sphinx. She reveals which at company sold to CCG a great amount of a fluid done of corpses ghouls, she talk which the Dr. Kanou's mansion is of fact property of the CCG. She reveals which the president of Sphinx Nanao Yasuhisa was dead for a ghoul, doing Amon questioning to CCG after she ends going out of over there.

She pops up in followed after of ambush the sent group for kill Yoshimura exhausted in battle with his father, she so attacks to investigators injuring them. She so begins torture Shinohara and taunting Juuzo Suzuya him which was injuring. After Arima and his Squad 0, Arima and Eto fight he ends causing much serious injuries forcing to elope of over there, she swallows his father and runs way of over there mocking of CCG. After when she of his form Kakuja is reveals which Eto, Sen Takatsuki and One-Eyed Owl is the same people.

She is view talking with Kanou and Tatara, suggesting which they will have who replace Kaneki for a new.

after Tsuneyoshi Washuu suggest which the One-Eyed Owl and One-Eyed King of Aogiri Tree is same people, reaffirm which she should being defeated to any cost.

In Some moment Eto Dr. Kanou talk about Koutarou Amon, while observing Amon unconscious in a chamber. After Kanou reflected about his status of investigator ghoul, Eto is disdainful about his past due at his ghoulification.

Eto then appears and talks to Ayato and asks her to go as coast guard for Big Madam and then she jumps up and leaves. During the auction, Kanou and Eto appear talking, he then asks Eto if he can release the new Olw, which Eto accepts, it is revealed that Seidou Takizawa the former investigator, had turned the new Owl, then he complains of being with Eto, and goes to attack the investigators ghouls and Kaneki.

Eto then appears watching the fight between Kaneki, Quinz, against the Aogiri members who were hired by Kanae Von Rosewald. After Kanae leaves all wounded and angry with Kaneki promising that he would kill him if he finds himself again, Eto then appears and laughts at this, Kanae then becomes angry with her, Eto then offers an apple to Kanae then discovers that she is a one-eyed ghoul, she agreed with and she attacked him with his kagune. After Eto managed to manipulate him and started that his sense of loyalty was a possession and jealousy, then she continued to torture him mentally. But later, Eto was keeping Kanae in captivity and torturing him while she gave one of kagune apart.

When the CCG began its operation against the Tsukiyama family, it then examined the place and gave instructions to Noro.

While Sasaki and Kanae fight, Eto then appeared with his kakuja and attacked him, soon after she mocked him starting that if it were the Arima would have deviated from his attack. Later when Kaneki recovers its memory and that it sees an incapacitated Kanae, he is subdued by Kaneki, then Kaneki stabs Tsukiyama, then she commented on this, and called cold for shedding blood, and asked that who was stronger he Arima. Kaneki then replied that she is cold and tells her to die, they two then start to fight. Kaneki tells her that his father asked him to save her, that she laughed at it, Kaneki then mocked her in a rude way that she did not deserve to be saved, Eto stayed annoyed that he had succeeded in hitting her, she later reformed his kakuja, she then attacked him and chased him through all the building. Kaneki later managed to impale his kakuja's head by making Eto leave. She then licked his wound by embracing his affection for Kaneki before being cut off by him, she then regenerated herself and was taking a shower and asked if Kaneki put her arm.

Then she appears again and talks to Tatara that they will have to replace Kaneki with a new one - using Seidou for that. She also talks to Kanou about Amon, and that she observed him. However, she disdained him saying that it happened in the past due to his demonization. 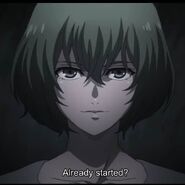 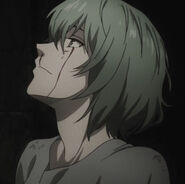