Antagonists Wiki
Register
Don't have an account?
Sign In
Advertisement
in: Pure Evil, Destroyer of Innocence, Murderers,
and 28 more

Dietlinde Eckhart is the main antagonist of the movie Fullmetall Alchemist: The Conqueror of Shamballa. She is the leader of the Thule, and a member of Hitler's Nazi Party.

During World War II Germany, Eckhart appears as a high-ranking Thule figure who while she is driven by ambition and with some knowledge in alchemy. And after she and her subordinates succeeded in capturing Envy and to keep him for they had to cease to use him as a catalyst in Shamballa, which while she leaves Envy chews Hohenheim. She sends her team to the Gate, only for them to be killed, but she is not intimidaded, she then uses the second attempt using Alfons Heidrich's rocket, which is Alfonse Elrich's counterpart, and creating an aircraft to travel to the other hand, and using Envy and Hohenheim as sacrifices. And Eckhart and his soldiers move to the Gate, leading them to convince themselves to destroy Shamballa with their newly alchemical abilities.

Then when Edward Elrich manages to save his brother after defeating many. While Eckhart is confronted by a monstrous creature that tries to kill Noa in a rage. However Eckhart is shot dead by a policeman who sympathizes with his Nazi ideals.

Eckhart is a soft-spoken but greedy and cruel woman who will do anything to get what she wants. She also seems to be disloyal to her Führer Adolf Hitler. And in a ironical way the Thule Society helped Hitler, he decided that he no longed needed their services, which were just pawns for him. 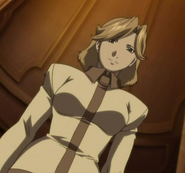 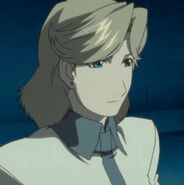