Dark Yuki or also known as Gemini Zodiarts was the evil side of Yuki Jojima, she was also one of the Horoscopes, and a major antagonist in Kamen Rider Fourze. 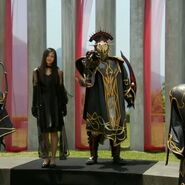