Copper is one of the main characters in The Fox and the Hound and it's midquel. He is Tod's best friend, Amos Slade's youngest pet dog and Chief's adoptive son.

Despite being a protagonist, he becomes the tertiary antagonist of the first film when he helps Amos Slade try to kill his own friend, Tod and he also tried to kill Tod's girlfriend, Vixey. However, he later reforms as he protects Tod from his master Amos Slade, then Tod and Copper became friends again. 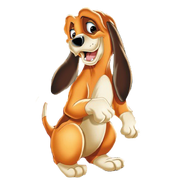 Copper as a puppy.
Community content is available under CC-BY-SA unless otherwise noted.
Advertisement