Constance Welchis a ghost who haunted the highway and killed people who gave her a ride, and dressed like the Woman the White. She is the main antagonist of the pilot episode of the first season of Supernatural, she appears with a minor antagonist in the fifteenth season in the episode ''Back and to the Future''.

In 1981, when Constance was 24 years old she went crazy and killed herself and also killed her children after discovering that he was unfaithful to her. Because of that, she haunted the highway again and started killing unfaithful men just like her old husband.

Then when she died. Constance started seducing unfaithful men and making them, and then Sam and Dean Winchester decide to participate in the case after ten men are killed by her on the road. Then when the Winchesters hear Constance's message saying ''I can't go home''. The brothers then take her home after she almost kills Dean. And her children appear and she is destroyed.

Back and to the Future[]

She returns to hell after God caused the disorder. This time Constance appears as a minor antagonist along with Mary Worthington who as well as she appeared in the first season, and the historical figures John Wayne Gacy and Lizzie Borden. They try to kill the Winchesters and Constance recognizes Dean and tries to attack him, but takes salt bullet. And then with Rowena's help, all the ghosts are trapped.

Constance in her ghostly form 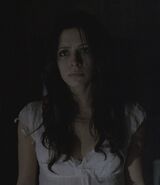