Selina Kyle, also known as Catwoman, is an anti-heroine in the Batman franchise. A homeless orphan who lived on the Gothan City streets, Catwoman robbed people to survive. Wanting to steal her own way, she learned martial arts and her main weapon was a whip. She loved cats and had them as pets. Catwoman's main crime is stealing, refusing to kill innocent people. Her fighting skills make her a dangerous enemy to Batman, but they both have a slight attraction to each other, even teaming up occasionally. The people Catwoman mainly robs are gangsters and mobsters.

Catwoman in the comics claimed to be an amnesic flight attendant who, during a plane crash that she survived, was struck in the head and lost her memory. She eventually reformed and became an ally of Batman until she became a criminal once again. She was absent from then on until 1966.

Batman: The Brave and the Bold Edit

She is portrayed by Lee Meriwether

Catwoman is portrayed by Michelle Pfeiffer in the 1992 feature film Batman Returns. Re-created by Daniel Waters, the character is based on the Selina Kyle from "Catwoman: Her Sister's Keeper". Annette Bening was originally cast in the role but dropped out due to pregnancy;[71] then Nicole Kidman and Demi Moore both got offered the role but both turned it down. Then, when Pfeiffer expressed an interest, something clicked to the producers thinking "She's perfect. She also could be both Selina Kyle and Catwoman.".[72] This version of Selina Kyle is depicted as the lonely, frustrated, yet dutiful and efficient secretary of corrupt tycoon Maximillian "Max" Shreck. After she accidentally discovers his plot to build a power plant that would steal Gotham's electricity, Shreck attempts to murder her by pushing her out the window of his top-story office. Though her fall is partly broken by several canvas awnings, Selina lies motionless on the snow-covered ground seemingly dead. She is then mysteriously revived by a group of alley cats that flock around her and begin gnawing at her fingers. Making her way home in a daze, Selina's repressed rage transforms her into the clever supervillain Catwoman. After Batman thwarts her schemes, she joins forces with the Penguin to destroy Batman. They frame him for the murder of the Ice Princess and Catwoman rejects the Penguin's advances, prompting him to hook an ascending umbrella to her neck. She breaks free but crashes in a greenhouse but does not die as she has developed nine lives during her transformation. Later, while she and Bruce dance in a ballroom, they recite lines said to one another earlier as Batman and Catwoman, revealing their identities. At the climax of the film, Selina uses a taser from a thug who tried to kill her to kiss Shreck, electrocuting him to death after he shoots her four times. Batman finds Shreck's body but doesn't find Selina's corpse. Right at the end of the film, Bruce Wayne spots her silhouette on a wall and when he leaves, she is seen gazing at the Batsignal, confirming her survival. Pfeiffer's Catwoman derives heavily from the Pre-Crisis Catwoman.[73] Michelle Pfeiffer creates distinctly different voices for Catwoman, with the voice of Selina being softer while the Catwoman voice is deeper and sultry.

Catwoman is briefly mentioned by Dr. Chase Meridian in Batman Forever, the screenplay of which was originally written as a direct sequel of Batman Returns. She states that she has done her homework on Batman, that he likes "strong women", and asks teasingly if "she needs skin-tight vinyl and a whip". Catwoman was to get her own film, where Michelle Pfeiffer was to reprise her role, but the film lingered in development limbo for years, with Ashley Judd snatching the lead role and eventually becoming 2004's critically panned Catwoman starring Hallie Berry and is non-canonical to the series and not in the DC Universe.

In 2004, the feature film Catwoman was released. Starring Halle Berry, this film's Catwoman bears little resemblance to the comic book version. Berry portrays Patience Phillips an artist and graphics designer, who works for a cosmetics company called Hedare Beauty, which is ready to ship a new skin cream called Beau-Line, that is able to reverse the effects of aging. However, as Patience visits the factory where it is being manufactured, she overhears a discussion between the scientist Dr. Ivan Slavicky (Peter Wingfield) and Laurel Hedare (Sharon Stone), the wife of company owner George Hedare (Lambert Wilson), speaking about the dangerous side effects from continued use of the product. Laurel's minions discover Patience and are ordered to dispose of her. Patience tries to escape using a conduit pipe, but the minions have it sealed and flush Patience out of it, drowning her. Lying washed up on the shore and lifeless, Patience is mysteriously brought back to life by an Egyptian Mau cat, and from that point on develops cat-like abilities and an insatiable desire for vengeance. With the help of a researcher named Ophelia Powers (Frances Conroy), who tells her that Egyptian Mau cats serve as messengers of the goddess Bast, Patience understands that she is becoming a "catwoman" reborn with abilities that are both a blessing and a curse. Wearing a mask to disguise her identity, Patience stalks the night as Catwoman seeking the answers to who killed her and why. Eventually, her search leads her to Laurel Hedare, who murders her husband for his infidelity and frames Catwoman for it, causing her to be taken into custody by the police. Yet, Patience slips out of confinement and confronts Laurel in her office, revealing that Laurel is the one responsible for Patience's death. During the fight, Patience scratches Laurel's face, and Laurel nearly plummets to her death when she falls out of a window, grabbing onto a pipe for dear life. Laurel sees her face in a reflection and horrified, fails to grab hold of Patience's outstretched arm and falls to her death. Though Patience was cleared of any charges made against her regarding the deaths of the Hedares, she chooses to continue living outside the law enjoying her newfound freedom as the mysterious Catwoman.

The movie alludes to other women in the past who have been granted such cat-like abilities, particularly in a scene in which Patience is introduced to a series of photos of prior Catwomen, including Pfeiffer's Batman Returns version of Selina Kyle.

The film's story has nothing to do with Batman or Gotham City, and is considered "Catwoman in name only". It was poorly received by critics and audiences and is commonly listed as one of the worst films ever made.

Anne Hathaway as Selina Kyle in The Dark Knight Rises.

Anne Hathaway portrays Selina Kyle in The Dark Knight Rises,[74][75] Entertainment Weeklydescribes Selina as an enigma, a wily and witty con artist, as well as a high society grifter. Selina is depicted as a femme fatale antiheroine whose actions often blur ethical lines, similar to her portrayal in the comics.

In the film, Selina is hired by corrupt businessman John Daggett to steal Bruce Wayne's fingerprints in exchange for her criminal record to be expunged via a "Clean Slate" computer program, but Daggett tricks her into believing he has it. These prints are subsequently used by Bane to attack the city stock exchange and bankrupt Bruce with bogus stock trades. She also steals the pearl necklace belonging to Bruce's deceased mother from his safe and leaves having taking a departing congressman hostage. When meeting with John Daggett's assistant Philip Stryver, Selena has the congressman with her as she demands the "Clean Slate" that John Daggett promised her, she is betrayed by Philip Stryver and the police raid the meeting. Selena escapes while the wounded congressman is rescued. After leading Batman, Wayne's alter ego, to Bane's trap without realizing that they are the same person, she attempts to flee Gotham, fearing that Bane and his men will eventually kill her. She is arrested by John Blake who interrogates her on where Bruce Wayne is and mentions that the rescued congressman is pressing charges. and taken to Blackgate Prison to await trial. She is subsequently released during Bane's coup d'etat. Although she hoped for the ensuing chaos, she later regrets it. When Bruce returns to Gotham and offers her the "Clean Slate" after she saved a kid from two thugs, she aids Batman and his allies in liberating Gotham City from the League of Shadows. With Selena's help, Bruce was able to rescue Lucius Fox. Using the Bat-Cycle, Selena destroys the blockade at the tunnel leading out of Gotham City. During the battle, Selena manages to use the Bat-Cycle to shoot Bane and helped Batman destroy Talia al Ghul's convoy. At the end of the movie, Bruce leaves the mantle of Batman behind and enters a relationship with Selina. She is never referred to as "Catwoman" in the film, although she does receive the moniker in relatedThe Dark Knight Rises collectibles and books. Instead, emphasis is made upon her profession as a "cat" burglar in headlines shown in the film; also, her safecracking goggles resemble cat ears when not in use. 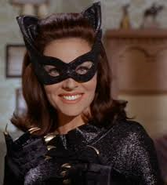 Catwoman portrayed by Eartha Kitt
Add a photo to this gallery
Retrieved from "https://antagonists.fandom.com/wiki/Catwoman?oldid=129940"
Community content is available under CC-BY-SA unless otherwise noted.