Antagonists Wiki
Register
Don't have an account?
Sign In
Advertisement
in: Spider-Man Antagonists, Marvel Antagonists, Destroyer of Innocence,
and 36 more

Dr. Carlton Drake is the central antagonist of 2018 film Venom, which is based on the Marvel comic book character of the same name. He is the misanthropic CEO of the Life Foundation, who is bent on fusing humanity with symbiotes in order to "save" the human race. This incarnation of the character is also noticeably more villainous than his comic counterpart.

He was portrayed by Riz Ahmed in his first villain role.

Carlton Drake, while undeniably a genius and a man with bright potential, is defined by his social Darwinism and hatred of mankind. He strongly believes that mankind is chaotic and too weak to exist, and therefore he wants to bring the symbiotes onto Earth because he deems them as much better than humans. Due to his extreme misanthropy, Carlton never hesitates to murder friends or workers of his own, such as when he fires his security guard, experiments on Skirth by making her unwillingly bond with a symbiote, and uses Riot to murder a scientist who was planning on exposing Drake's true goals and then killing every other worker there as well for no reason but his misanthropy (or possibly to eliminate witnesses).

Drake is also clearly a psychopath, as he often presents himself as a warm and likeable person for publicity, such as when he happily talks with a bunch of kids, but behind the facade is a cold and calculating man who cares for nobody. This is especially proven by the fact that basically everyone who Drake interacts with in the film, even if he's nice to them, will sooner or later be affected by his ultimate goal of causing a near-genocide of humans.

Dr. Carlton Drake is the corrupt CEO of the Life Foundation and believed that the bonding between human and symbiotes result in a perfect species. At some point, he had a probe sent into space to investigate extraterrestrial life, coming across four organisms—symbiotes—from a comet. En route back, the probe crashes upon re-entry, so Drake has the crash site in East Malaysia investigated. One of the symbiotes, Riot, escapes. Following this, Drake takes possession of the three remaining symbiotes, and performs experiments on them, attempting to bond the symbiotes with human subjects to achieve symbiosis. However, series of such experiments prove to be failures; while some hosts last longer than others, all end up ultimately killing human subjects. And symbiotes, eventually failing to find suitable human hosts, die as well.

One day, in San Francisco, journalist Eddie Brock realizes Drake's crimes, and sabotages an interview with him to confront him about this. Drake has him sent off and eventually fired. Six months later, after the death of one of the symbiotes, Drake realizes that Brock has infiltrated his facility, and made off with another symbiote—Venom. Realizing the treachery of his associate Dr. Dora Skirth, he unleashes upon her the last symbiote in his possession, killing her. But Carlton also loses his last symbiote in possession.

Drake finds out Brock's identity, and has his mercenaries (led by Roland Treece) to pursue him, but they fail; despite this, Drake realizes Venom and Eddie have successfully achieved symbiosis. While progressing with more of his human experiments, and having Treece successfully capture Brock, Drake himself meets a little blonde girl in his lab, who is revealed to be Riot's host. Drake is attacked, and Riot fuses with him, to the point where they achieve symbiosis as well. Drake threatens a captive Brock, who no longer has the Venom symbiote in his possession, and explains his and Riot's plan to launch a spaceship into space and bring back even more symbiotes (numbering in millions) to assimilate humanity.

After Brock eventually re-bonds with the Venom symbiote, he confronts Drake and Riot on the rocket launch platform. After a prolonged fight, Riot and Drake merge off of each other, prompting Brock to kick Drake off into the ocean below. However, Drake survives, and Riot uses Drake to impale Brock. As the two are launching into space, Venom takes control of Brock and sabotages the spaceship to the point where it combusts, incinerating Riot and Drake in the spaceship's destruction. 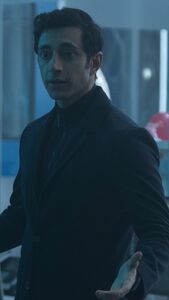 Venom-tom-hardy-1280x720.jpg
Drake being interviewed by Brock.
Community content is available under CC-BY-SA unless otherwise noted.
Advertisement