Antagonists Wiki
Register
Don't have an account?
Sign In
Advertisement
in: One Piece antagonists, Pure Evil, Psychopath,
and 47 more

Kill everyone in Syrup Village including your own crew and live in peace with the Marines.

Imprisoned
Captain Kuro is the main antagonist of Syrup Village Arc in One Piece.

Captain Kuro is a very intelligent leader with the second highest IQ in East Blue behind only Benn Beckman, whose plans never failed. Besides that he was also a psychopath because he considered his subordinates as disposable pieces and during his fight against Luffy he started killing them, just because he considered them weak and disposable. He also acted as Kaya's butler, and prentended to have affection for her. Although it was all part of his plan. 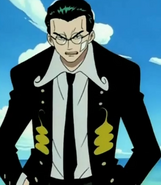