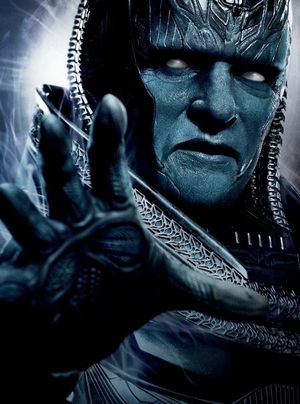 En Sabah Nur, otherwise known as Apocalypse, is one of the two overarching antagonists (alongside Sebastian Shaw) of the X-Men film series. He is the titular main antagonist of the 2016 superhero film X-Men: Apocalypse.

Apocalypse is the world's first and most powerful mutant, who was born prior to 3,600 B.C. in Ancient Egypt, where he was worshipped as a god. He possessed various mutant abilities that made him seemingly invincible. Apocalypse would always select four powerful mutants to serve him as his Four Horsemen. Upon awakening in the modern world, Apocalypse recruited Storm, Psylocke, Angel and Magneto to serve as his Horsemen.

He is portrayed by Oscar Isaac, who also portrayed Blue Jones and Nathan Bateman.

He was born as En Sabah Nur in Akaba, Ancient Egypt prior to 3,600 B.C (and possibly tens of thousands of years earlier according to the beliefs of a cult that worshipped him). Later, he was being described as a god because he has various of superhuman abilities and powers that he took from other mutants after killing them through the millennium. Then, he assumed the alias "Apocalypse", because he was considered by many the world's most powerful mutant, and was unable to be defeated or kill. Many of people in the world established and led secret societies' following his existence.

The Four Horsemen Group and his plans

After becoming a godlike figure, he founded a group of his own four henchmen, in ancient times he led a first group of his four minions and called it "The Four Horsemen", as was named from the Bible. After ancient times, he led a new group of his Horsemen made from; Erik Lensherr aka Magneto, Psylocke, Angel and Storm in order to carry out his plan; he wants to kill The X-Men Team led by Xavier and Raven, then to lead his group into destroying the entire human race to rebuild the world in his own image and rule over the surviving mutants as a king.

X-Men: Days of Future Past

In this film, he appeared as the key figure/antagonist in the post-credits scene, a young Sabah Nur is seen in using his own incredible powers to construct the Great Pyramid of Giza while a vast crowd of people bow before him, chanting his name while his Horsemen look on.

En Sabah Nur, known by others as "Apocalypse", the firstborn of the mutant race was born prior to 3600 BC (claiming to have been worshipped by several ancient civilizations over his many lives, being called Elohim, Shem, Ra, Krishna, and Yahweh, among other names), as he rules the world in Akkaba of ancient Egypt. Moira MacTaggert's research puts it as if he lived some millennia before the incident where he went missing: while performing a transferal of his consciousness to a newer body, his worshipers betray him and set for the destruction of his pyramid. The Four Horsemen ensure Apocalypse still survives the ordeal even as the monument is collapsed, killing the followers while keeping En Sabah Nur entombed for millennia.

Following the 1973 incidents that revealed mutantkind to the world, a group of Egyptians started the Cult of En Sabah Nur and discovered where his resting place lied in Cairo. As Moira investigated them in 1983, she saw En Sabah Nur awaken at the ruins, killing the cultists.

En Sabah Nur decides to explore the modern day world, and while roaming Cairo, he sees street thief Ororo Munroe use her weather control powers to steal food. The shopkeepers go threaten Ororo, being interrupted by the intervention of Apocalypse. After miscommunication due to En Sabah Nur speaking outdated dialects, he eventually kills the men chasing Ororo by using sand to punch through the sides of their necks and literally melting the last into a wall.

Ororo takes En Sabah Nur to her house. Once he sees a television, touching it enables Apocalypse's powers to connect to all broadcasts in the world, making him learn modern languages and how mankind evolved the previous millennia. Believing that without his presence, humanity has grown weaker, he decides to destroy it in order to rebuild society from his point of view. He enhances Ororo's powers to turn her into the first of the new Horsemen. Apocalypse and Storm then go to Berlin seeking Caliban, a mutant broker who knows the location of other Homo superior. Caliban refuses to concede information without getting paid and draws a gun on En Sabah Nur, who proceeds to use his powers to disintegrate it. Caliban's enforcer Psylocke then extends a sword and her psi-katana upon Apocalypse to protect her boss. Impressed, En Sabah Nur goes on to enhance Psylocke and turn her into a Horseman, and she replies by taking her to a powerful mutant. Angel, a former cage fighter who went into drunk depression after injuring his wings fighting Nightcrawler, becomes the third Horseman as Apocalypse replaces his wings with metal ones, renaming him "Archangel", "my Angel of Death".

After recruiting the trio, Apocalypse arrives together with them to a steel plant factory in Poland, where Erik Lehnsherr, also known as "Magneto", wants to kill his former co-workers for causing the death of his wife and daughter. Apocalypse kills the workers by fusing them to the ground, and teleports with Magneto to Auschwitz Concentration Camp, where Erik had seen his powers awaken 40 years prior. After some encouragement from En Sabah Nur, who tells Erik that Earth's magnetic field and ground metals can be exploited by Magneto's powers, Erik proceeds to destroy the ruins, and promptly agrees to join forces with the ancient mutant (who further enhances Erik's already immense mutant powers), becoming his fourth and final Horseman of the Apocalypse.

As Apocalypse gathers his Four Horsemen and gives them special armor, Erik is contacted telepathically by Charles Xavier through Cerebro. En Sabah Nur notices the communication and uses his powers to take over Xavier's mind, and by extension Cerebro. Apocalypse forces military around the world to launch Earth's entire nuclear arsenal into space so it cannot be used against him. After Havok destroys Cerebro with his powers, Apocalypse and the horsemen teleport to the X-Mansion to kidnap Xavier. Havok's attempt at attacking Apocalypse ends hitting a generator and causes a massive explosion that destroys the mansion, with everyone inside other than Havok only surviving due to Quicksilver's intervention.

Xavier is brought by En Sabah Nur to Cairo, and forced to broadcast a threatening message to all the human race on the behalf of Apocalypse. Without En Sabah Nur knowing, Xavier also revealed his location in a hidden telepathic message to his student Jean Grey. En Sabah Nur destroyed most of Cairo to rebuild his pyramid, and ordered Magneto to stand outside it using his powers to control Earth's magnetic poles, causing widespread destruction across the planet and mass casualties. Meanwhile, inside the pyramid En Sabah Nur would transfer his consciousness to Xavier's body, as the telepath's powers would allow him to "be everywhere, be everyone".

The X-Men arrive during the process, and Nightcrawler interrupts the transferal by teleporting Xavier out of the pyramid, but not before Professor X loses his hair. As Apocalypse steps outside the pyramid, he witnesses Angel defeated and is repeatedly punched in the face by Quicksilver, who uses his super speed to not be noticed, until En Sabah Nur catches on and traps one of the speedster's feet to the ground. As Psylocke comes closer, he requests for her to execute Peter. Instead she strikes En Sabah Nur on the neck, and seeing it is not his Horseman, he proceeds to attack and strangle the mutant, revealed as a disguised Mystique.

He orders Xavier to reveal his location, and the telepath goes on to attack Apocalypse at the Astral Plane. En Sabah Nur finds Xavier's hideout, but his attempt at getting there is interrupted by two Horsemen switching sides: Storm, who idolized Mystique, and Magneto, who did not like seeing his former friends attacked.

While the X-Men fight Apocalypse, Jean ventures into the astral plane and learns from Xavier that Apocalypse is weakened after centuries in the same body. Jean and Magneto join forces and dismantle Apocalypse's armor, with Jean tapping into the Phoenix Force. Once En Sabah Nur's frail true form is exposed, Magneto pierces him with a tremendous torrent of high-speed metal projectiles, after which Phoenix incinerates him, finally ending the threat of Apocalypse.

He is being described as a god-like mutant, because he is the world's first mutant who was born. Sabah Nur is an absolute genocidal psychopath, who has no sympathy to the weaker people; humanity which he wants to exterminate. He think the world is chaotic because it's shared on nations and only he can correct it by uniting it under his absolute rule.