Kill Ciel and Sebastian, and then purify the world.

No information
Angela Blanc is the main antagonistof the first season of anime Black Butler or in (Japanese, Kiroshitsuji), which was based on a manga of the same name, she is angel and the female version of Ash Landers who is a main villains just like her, also.

Angela at first seems to be a submissive and tolerant woman, being beaten by Henry Barrymore in front Ciel Phantohive and Sebastian Michaelis. However, she proves to be a dominatrix, as when she changes clothes and totally zealous attitude when she tortures Sebastian. And Mey-Rin describes her as a strong woman after catching her in a provocative act with a man. And thought she's hermaphrodite, when she's in her feminine form, she tries her hardest to be recognize as a woman, how to engage in provocative and sexual acts, even with Pluto, and when she offers herself to Sebastian, and he rejects her, she gets uptset about it, too Sebastian was totally suspicious of her as she tamed Pluto with ease. Angela also has an obsession with purifying beings, in which she herself considers them impure rather than Ash, and being a craze in her efforts to do so, however, she can also use those she considers impure. if She has bluish-white hair, black eyes, and dresses in a variety of clothes she wears and mostly lavender and white. And when she's in her angelic form she wears a feathery dress. She is a beautiful woman attracting both Finnian Baldroy at her first sight.

Angela soon greets the Phantomhive family for the first time in Houndsworth, and when she makes a mistake she is phisically and verbally assaulted by Henry Barrymore until Sebastian stops him. With that the whole Phantomhive family begins to provide you simpathy, as one of Phantomhive's servants and offering help along with Sebastian. Shortly after that night, Henry is upset about their presence, and has shown little hostility over the acquisition of Queen Victoria, she asks staff to leave when a shadow of a lange dog appears in the window, and they come a dog running around town, and James who is dead, possibly at the hands of the demon dog.

Once there, they used other dogs to attack James, who Finnian intervenes with, and when Henry decides to kill Tanaka, and Ciel, Finnian, Baldroy and Mey-Rin intervene, and she loses forgiveness, but he does not give in. And when Henry dies, Phantomhive's servants investigate and it turns out that dog is responsible for it, so she gives Pluto to Ciel, and sure Sebastian will tame him.

Angela has a small appearance on the plot, when Ciel, Sebastian and Grell discover that Drossel Keinz was being controlled by someone else, and when the doll leaves the Mandalay mansion, Angela then picks up the doll and crushes it with her hands and throws it into the river.

Angela appears again, and has only a brief ocurrence, and giving one of the contestants the curryman spice, which causes members of every audience with a few exceptions to become agitated which is eventually mitigated by Sebastian's curry bread.

When Ciel, Sebastian and Grell investigate the cult's activities and a magic play, they soon find out that Angela is behind it. She then transforms into his angel form and kidnaps Ciel leading him to the Grim Reapers library, where she tries to rewrite her past and when that fails, she gets mad and tries to kill the cult's followers, but she is stopped by Sebastian, and Grell and William T. Spears though Undertaker help restores everything to normal.

Later when Ciel and Sebastian are in Scotrand Yard for an offense that they obviously did not commit, Sebastian gets arrested as she arrives and starts torturing him something that excites her. After Ash ravages Pluto, Ash/Angela talks to Sebastian in London, Angela soon proves to be the same as Ash. She offers to him and gets annoyed when he leaves and joins Ciel. With this soon after, Ciel and Sebastian confronts Ash/Angela, and Sebastian defeats Ash/Angela white he is in his demonic form with ease.

When Sebastian hides Ciel in a box, Ciel soon begins to flash back to Angela and Ash. 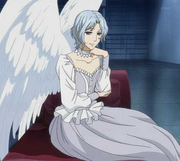 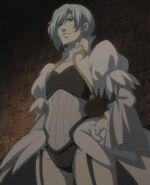 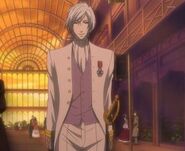