No information
Amber (née Brooks) Canardo was a psychopath and serial killer misognyst that appeared in Criminal Minds as the main antagonis of episode The Perfect Storm in second season.  She was portrayed by Nicki Aycox.

Amber was born in the year 1985, she sexually assaulted years by her brother and father, when she was in her teens she was raped and beaten and went to the hospital in Tallahassee, her mother arrived and said that Amber lied about the attacks and then investigation stopped and the rapes continued. And as a consequence Amber was marked by the trauma and rape that was committed by her brother and father, Amber also became a misogynist and sexual sadist, she began kidnapping and killing teenagers, she convicted her boyfriend to help her, the girls would soon be placed in a booth and tortured by her and her unnamed partner, then Amber possibly her killed him.

Amber latermet his new boyfriend and partner named Tony Canardo, when he was released from prison, the two would soon start killing girls and record their crimes as torture, murder and rape as a form of sadism. The two also would have Joey Davin to discard cars on the state currecies without having a notion of what the two were actually doing. However, when the mother of one of her victims appeared on TV pleading for the return of her daughter, Bonny Mossenberg, and begging forgiveness for her abductor, this infuriated Amber soon sent a DVD to Mrs. Mossenberg who showed her daughter being killed, tortured and raped. Amber later killed her last victim Laura Clemensen, she later sent a DVD to Laura's parents, which shows her being assaulted, raped and killed shortly after seeing that her father died of a heart attack. And soon after that BAU began to investigate it, they then find a link to Joey, BAU then goes there to investigate further Joey does not cooperate and is dead. After Amber kidnaps Tiffany Spears, Tony asks Amber for instructions, Tony is later called in for questioning, BAU believes he is the dominant and Joey is submissive, yet nothing works. However, all of this was her downfall when Amber was alone with Tony and though her eye contact with him, Hotch soon realized that Tony was not the true intellectual mentor in this, and combined with Amber's past histories and having been abused sexually by his father and brother and his mother. And Tony soon confesses his crimes when they realize that DNA evidence proves that Amber really killed the men before they even met. Soon after, the BAU goes after Amber who starts assaulting Tiffany both physically and verbally practically torturing her, when the police arrived they took Amber away from Tiffany,and Amber still a before being arrested, and while Tony was also arrested for his participartion in crime. 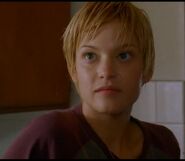