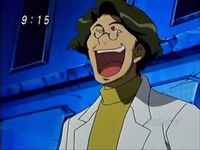 Professor Akihiro Kurata is a major villain in the first half of Digimon Data Squad. One of the few human antagonists in the series, Kurata is a xenophobe who hates all Digimon and vows to destroy them, along with the Digital World itself.

He was voiced by Masami Kikuchi in the Japanese version, and Brian Palermo in the English version channeling the late Vincent Price.

He is the first genuinely evil human villain in the franchise, whereas previous human antagonists always redeemed themselves, as well as arguably the most evil Digimon villain ever.

Kurata was once a member of the Dr. Spencer Daimon's exploration team, but soon became afraid of Digimon after some attack caused by the local inhabitants. He later returned to the Digital World and begun his reign of terror by destroying innocent Digimon with his own creations, the Gizumon, including Keenan Crier's (the mission's target) foster mother, Frigimon. Then Merukimon arrived on the scene and destroyed the Gizumons, and attacked Kurata, forcing the evil scientist to retreat back to the Real World.

Some time after the incident, Kurata disguised his evil by organizing another expedition to the Digital World, right after Keenan's rescue by Marcus (Spencer's son), Thomas and Yoshino and their respective partners. Throughout the expedition, they defeat Merukimon's henchman, Gotsumon, and manage to reach his castle. However, Kurata finally reveals the story and took his revenge on Merukimon by using his Gizumon AT, shooting him through the chest and wounding him. Marcus attempts to attack Kurata, but was blocked by Gizumon AT. Kurata threatened to prosecute the Data Squad members for treason if they challenged his story about Merukimon attacking him first. He also tells Kurata that he only wanted to destroy Digimon instead of dealing with them, and making him a coward. Kurata Digivolved Gizumon AT into Gizumon XT. During the battle, Merukimon explains to Keenan that he doesn't hate all humans, not even Marcus. He sacrifices himself to do several damage to Gizumon XT, and Merukimon is destroyed, also destroying his Digi-Egg. After learning about not hating all humans, only humans who are evil in their hearts, Keenan furiously Digivolves Falcomon into Crowmon for the first time and destroyed the first Gizumon XT, but Kurata also escapes the spot through a Digital Gate.

When the Data Squad members returned to DATS headquarters, Director Hashima dismisses them as traitors and erases their memories and imprisoning their partner Digimon, allowing Kurata to take over DATS. After Marcus and the others recovered their memories and reunited their partner Digimon and defeated a Gizumon AT, Kurata destroyed DATS headquarters by blowing it up and escaped to the Digital World.

Later, when the DATS were trying to stop Kurata from destroying peace in the Digital World, they encountered Kurata's henchmen, the Bio-Hybrids, a trio of human that each have the ability to Digivolve themselves into a Digimon. When Marcus and Keenan were about to take their revenge on Kurata, he opened up a huge Digital Gate to send ElDradimon to the Real World.

When the DATS returned to the Real World, Kurata had another trick up his sleeve. After the Bio-Hybrids were defeated, he used a huge javelin and used his Gizumon XTs to invent the ultimate weapon, the Gizumon Javelin, and succeeded to destroy ElDradimon. He had just enough data to revive his own Digimon, Belphemon. Thomas was manipulated by Kurata to join forces with him in order to cure his sister, Relena.

Kurata then used Belphemon as a remote control while battling the DATS team. When Thomas betrayed Kurata and destroyed the device. Upon his betrayal, Kurata became furious and decided to get revenge on Thomas by transforming himself into data and merged with Belphemon to become his Rage Mode and control him better. During the battle with Belphemon, his head emerged from his chest, more mutated and uglier than ever, getting in better control of the demon. He then starts ranting about hating Marcus Daimon for foiling his plans for becoming a world ruler. When Marcus told Kurata off, he went into a rage and ordered Belphemon to swallow the city lights to make him grow and swallow some space devices, giving Belphemon a new attack which can rip holes in the sky.

During Belphemon's new attacks, Kurata continues to rant. Kurata tries to blast away Marcus, but was stopped by MirageGaogamon, Rosemon, and Ravemon. Thinking that all hope is lost, Marcus begged ShineGreymon to give him more power, and him and ShineGreymon shared their friendship and became Burst Mode. Kurata was terrified when Belphemon's attacks met his match for ShineGreymon's new Burst Mode form. Marcus then emerged from ShineGreymon's hand, and Kurata attempts to beg for mercy, but Marcus punched him right in the face, while ShineGreymon did the same punch at Belphemon's head. After Belphemon was destroyed, Kurata reverted back to his human form, and was helplessly floating in the air where he did one last thing. He opened up the gate to the Digital World, but it caused the real world to be in danger. Shocked at this, Kurata struggles and screams for help, but is pulled into the gap between the two worlds and is vaporized in a white light. It was his own hatred that led to his demise, and with that, Kurata is gone for good.

Kurata's evil laugh and smile.
Kurata Fear.png
Kurata about to meet his doom.
Kurata Death.png
Kurata disappearing into the light.