William Bill Rawlins III or also known as Agent Orange is the overarching antagonist of the Netflix original series Marvel's The Punisher. He is main antagonist of Season 1, and a posthumous antagonist in Season 2. He is the incarnation of William Rawlins, the great enemy of The Punisher, who appeared in the comics, Punisher MAX.

In the series, version, he is ruthless and corrupt CIA agent and also the leader of Project Cerberus. An operation that took place in Kandahar that he specialized in eliminating the targets. One of the many members was a man named Frank Castle, then when the video leaked about the unit's brutal actions, Rawlins thought Castle was responsible. He then orchestrated the murder of his wife and children of Castle, with his actions he makes Castle become the vigilante and an enemy regurlaly known as The Punisher, Frank and a hacker known as Micro team up to take him down, he then he is captured by Rawlins and tortured, but manages to break free and kill Rawlins in the most brutal way that exists.

Rawlins is a brutal, violent, cruel and right man who often warns his subordinates in combat, mainly Castle, however this was all a fachada since he did not care about them and only cared about power.

Rawlins is a tall, bald white man who is always wearing a suit, he is also blind in one eye. 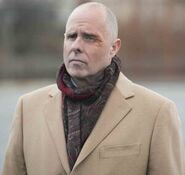 Rawlins being killed by The Punisher
Community content is available under CC-BY-SA unless otherwise noted.